It has been roughly 2 months since results day, this post should have been out way earlier, but I haven’t really had the time to sit down and write/type it out. This is just going to be my thoughts regarding my A Level journeys and everything else, what went right for me and the future installed for me. 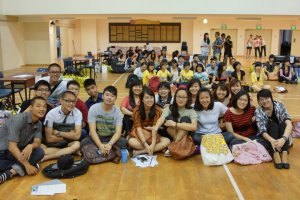 me with my class 🙂

Got to school, got my results, the end. That’s is basically a summary of what happened that day. Everyone in the school (as expected) did well, we had 90+ people getting 6As and above, which gives them a passport whatever course their heart desires. What I was more worried about are the rest of the 300 of us, can we get into the course of our choice? Or even worse, can we even get into any local university? Flashing back to what Mr Yap said to us a year ago, would we be crying tears of joy or tears of sorrow and regret? The wait to receive our results was so fucking bad, totally feel like shit during that moment. How would my 2 years of studying come out? All of these questions would be answered once I see those letters on that piece of paper…

So what was the end results? 3 words: Totally worth it. Of course, it could have been better, but I’m satisfied and happy, that is all that matters. Those mugging sessions in the school library, Starbucks, NLB, Subway, have not gone to waste! It also felt great to see all your effort paid off in the end. I supposed all the things I previously told myself really helped: the positive mindset, the constant hard work, the never-say-die attitude. Being “academically-challenged” for 4 years doesn’t mean that you have to be the same for the next 2 years. I still recall an assembly talk which showed statistics correlating GPA and A level results, well sorry but I didn’t see myself getting bad results since I had a lousy GPA. To those who think they aren’t “meant for studies”, don’t believe in those bullshit. People are “smart” for a reason, they study and put in the work, it’s just that simple. If you claim you study but still can’t get results, review your methods. Studying while talking to someone won’t help you absorb much, so there is always something out there where you can improve in. The most important thing is not to give up, never give up. Although you may feel down at times, just think how badly you want it, cause if you do, you will definitely work for it.

Here, I really have to thank the teachers who have helped me immensely throughout those 2 years: Mr Ng Hao Jin, whom I give full credit for saving my maths when I was at my worst and re-instilling my long lost passion in maths. My chemistry tuition teacher Chris, who although may not be the most knowledgeable, but always puts in the effort in preparing questions despite having another job. My economics tuition teachers Mr “Sean Pang” and Mr Gilbert Lee, one which gave me the foundation and another who probably vomitted marking my essays :x. And Mdm Koh Li Keng, who helped me at the final stretch of the As, even though I wasn’t her student which made me twice as grateful. I feel awfully sorry to Mr Augustine Chan for my below-par GP grade, who always comes up with interesting acronyms to help his students in GP.

And that’s for me, but what about the others? Some of them did well, got close to the 6As needed to stand on stage. Some did worse than expected, but good enough for most universities. And there are the others, whom I’m really worried about: those who may not even be able to go to a university, or go to courses not even close to their preference. It’s really frustrating to see people whom you know studied hard, but the results did not show on that goddamn freaking piece of paper. Some of them are your close friends, but you can’t do anything but say: “It’s going to be alright”, which doesn’t really help, which leads me to the post A-level days… The most surprising thing that happened the day after results day is that a teacher, whom I didn’t expect at all, called me. She congratulated me for my results, and lead to the discussion of my class, where some did not do well. She told me to do something for them to comfort them etc, which at that point of time I didn’t really care, but I don’t know why, but in the end I decided to write something for them, kinda like what I write here. I even wrote a draft first before typing it out and posted on Facebook, and what the heck, might as well tag along the 4F guys as well. To be honest, that post doesn’t sound like me at all, because I never really open up in front of my class unlike I do here. But thankfully, I got a positive response from it, even some teachers texted/Fb-message me and told me that they liked the note. What I wanted to say is all in the note, so those who are interested can read the note at the link below

So what is installed for me in the future? Well I got accepted into NUS Faculty of Science :). In the end, I chose interest over “utility”. With my grades, I could have gone into other courses which promised a better future, such as Business or Accountancy, but as I told myself, since I am going to study something for the next 4 years, might as well make it as enjoyable as possible. It always gets tempting to go to a course which seems more “sought-after”, but I think I made the correct decision and went with my heart, rather than just future practicability. I would probably have an average salary, but at least I would be doing something I enjoy. Just a little conflicted between Applied Mathematics and Statistics, both have its pros and cons. This leads to another big question mark in my life, what am I going to be in the future? I seriously don’t want to be a maths teacher LOL, but that seems like what most people do with a maths degree. Teaching do seems fun, but not as a profession. Imagine students come find me for consultations and I don’t know how to solve the question.. And how interesting could teaching Maths be? There’s only 1 way to solve it. Let’s just hope that I made the right decision!

So university life let’s go! But that would have to wait till 5 March 2014… Can’t wait to say the word ORD LO!